Like a Pain in The Ass; The South African Parliamentary Enfant Terrible 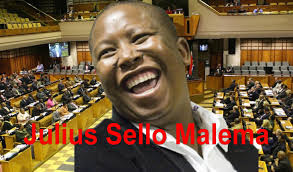 Julius Malema is the leader of the Economic Freedom Fighters (EFF) party in South Africa. He was a former leader of the African National Congress Youth League until he fell out with the leaders of the ruling party.
He founded the EFF in August 2013 after a spate of run-ins with the henchmen of the ruling party whom he took in headlong in a battle of wits that he was sure to lose. When he found out that the ground was shifting right beneath him, he decided to ditch the ANCYL after he was hounded by his previous benefactors.
He founded the EFF with a strong populist orientation that meant a flicker of hope for the suffering masses who were yet to feel the benefits of the post-apartheid regime. An understanding of the huge unemployment numbers among black South Africans provides inkling on the possibilities that Julius Malema held out for the teeming masses.
The Regalia
The members of parliament elected on the platform of the EFF are known to wear the red overalls with miners’ boots and red berets to parliament as a sign of alignment with the ordinary man on the street. In the early days, the ruling party, attempted to muscle members of the EFF from coming to sittings with their red regalia until the constitutional court held that their manner of dress was not in any way derogatory or illegal.

The many controversies that the part has stoked in parliament and across the country include;
• Land Redistribution
• The Marikana Massacre
• The Nkandla Saga

The land redistribution issue was fallout of the deliberate attempt by the black majority government to ensure equity in land ownership across the country. The background of apartheid meant that land was forcefully taken away from the aborigines and appropriated by the then apartheid regime. The huge investments made on agriculture were fallout of this compulsory land grab by the then minority government. However, with the advent of democracy, the ANC led government began a policy of land acquisition and redistribution across the provinces while also taking steps to ensure that some measure of equity and fairness is brought to bear on the process.
The EFF agenda in this regard was quite radical and non-procedural. The party encouraged the peasant blacks to move in on plots of land around their communities and occupy them forcefully. This in order words was a way of making sure that their perceived injustice of the past was readily atoned for by such extra-judicial actions.
This was to stoke criticism from across the country and the law enforcement agents had to be called upon on several occasions to wade in on such actions to prevent bloodshed. The government had to subsequently set up a framework and provided a timetable for the redistribution of land across the provinces in order to reduce the spate of land grab by the populist-minded agitations of the EFF.

The Marikana Massacre
This has been regarded as the bloodiest uprising in post –apartheid South Africa and it arose from the agitations of workers at the mining town of Marikana in the North –West province of South Africa. The mining giants-Lonmin was accused of working with the government to muscle the workers, who demanded for a better working conditions and remuneration.
The workers had staged a sit-out for months un-end and with the operations of their employer, once stifled; patience ran out on the government space which resulted in the crackdown by security agents on the workers. After the dust settled, the death toll was put at 34 and the outrage that greeted the onslaught refused to away until a commission was set up by the government to look into the cause of the bedlam and come up with a report.
The EFF militantly found a way to place this issue in the public space and even went ahead to produce a documentary on the massacre and the linkages to the country’s Deputy President- Cyril Ramaphosa who had substantial shareholdings in the mining company. They alleged that the Deputy President was in cahoots with the police and the mining giant in the whole saga. The commission of enquiry however did not find the Deputy President guilty instead, the National Police Commissioner was recommended for further probe.
In all, the EFF made mileage of the saga and witnessed a spike in public acceptance of the party as a defender of the downtrodden and helpless.

The Nkandla Saga
The president of the country has his homestead in Nkandla in the Kwazulu Natal Province of South Africa. Renovations and further civil works were carried out on the president’s property to the tune of over $20million USD. This made the EFF cry blue-murder, and besotted the President at every given occasion to make sure he refunded the cost of non-security upgrades to his property. The noise and brouhaha over this was earth-shaking across the country until an office of the National prosecutor turned in her report on the entire transactions.
In the meantime, EFF had galvanized a groundswell of support across the country producing songs, flyers and stickers that demanded the refund of the money spent on the president’s private property.
The exuberance displayed by member s of the EFF in parliament has called for question on many occasions. Sometime in 2014, the members of the party were forcibly removed from parliament by members of the security forces as the members heckled the president during his appearance in parliament.

The EFF has been confrontational and unbending in its resolve to confront the ANC-led government over its misdeeds and the perceived corruption across cadres of the country’s bureaucracy. Although, the popularity of the EFF has been on the upswing over the last two years, not many give the party a chance to lead the national government any time soon.